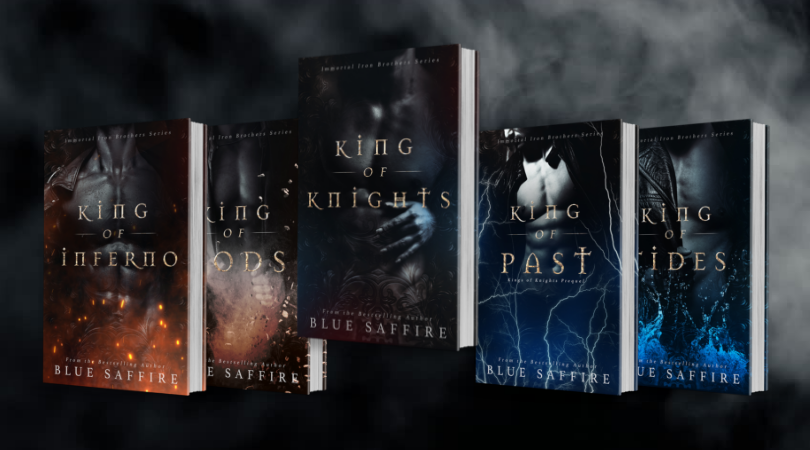 Did you know I'll be releasing my first paranormal romance series this summer? The prequel and book one will release on my birthday! July 16th!

I'm so excited. I'll be running for the USAT Bestseller list with these titles. King of Past is the Prequel to Book One King of Knights! I'm hoping to get your support to get there and my this a success.

I want to give you a taste of King of Knight.

I’ve seen too much. Things that can never be unseen, things that would taint my soul if I had one. I’ve lived the world, handled power one could only wish they had access to. Power so enormous it has to be harnessed and locked away.

Only fools cross the paths of my kind. They think they want ties to us, but being tied to one like me comes with consequences. Consequences that only bring darkness, but it’s those that seek darkness that seek us.

The Vito family has learned the consequence of looking for me and my brothers. They’ve entwined themselves to us for decades now. They’ve gained our loyalty, but at what cost? You can never hold an Iron Brother forever. Time burns out that bond one way are another.

It seems the Vito family’s luck has finally burned out. It’s been four generations. The longest we’ve served any one family. I’ve watched this all come to be. I’ve been waiting for our time of freedom.

“So, it is that time?” Ardan breaks through my thoughts, as I hold up a flame in my palm, staring into its depths along with my musings.

I release an amused breath. “They think they’re hiding something from us. They know not that this is a result of the bond,” I reply.

“It is quite amazing. Humans will always think they can outsmart us. It has never worked well for them,” my other brother, Bradan, chuckles.

I look from the flame to my two younger brothers. They are twins, one light and one dark. Ardan is fair with blond locks, Bradan has dark hair with tanned skin. Their temperaments are just the same. Ardan is slow to anger with a light heart. Bradan burns hot and is rough around the edges.

Other than that the two are identical. My middle brothers play off of each other. They’re fire and ice, literally.

“The Vito family has been the most just we have served,” my youngest brother, Reilly, says.

He is the most calm of us all. He has the ability to stay rational in all things. However, if you get on Rye’s bad side you are likely to get consumed in his fiery like a man in quicksand.

Reilly is the redhead in the family. Tanned like Bradan and I, but ginger to say the least. His golden eyes tell stories as they dance with hidden secrets beyond what they initially reveal.

I’m amused by Rye’s ability to see the silver lining in just about anything. I snuff out the flame in my palm and lift to my feet. I round my desk and lean back against its front.

My den has an old world feel that I love. There was a time when life was so simple for me and my kind. My brothers and I built this place with our own hands. Knowing someday we’d need to stick to the shadows away from the humans that live above.

If only the world of Manhattan knew the power that rests beneath it. We’ve glamoured the old brownstone on the street level, years ago. Just as we have done with the bar we’ve owned and run for more decades than I care to count.

I handcrafted this desk in one of my darkest times. It alone holds so much of my power. No one has been able to come close to it since it’s completion.

Not even my three brothers. Each has only ever made it a foot near before my power rolls off of the cherrywood and starts to oppress their own energy and powers. It is one of the reasons I hide my deepest darkest secrets within it.

Secrets I won’t even share with these three. I love my brothers dearly. I would give my life for them and have once come very close to doing so. Our life has not been an easy one. Long, very long, but never easy.

I fold my arms across my chest. My T-shirt stretches across my muscles and the leather of my cut whines under the movement. The Kings of Knights cut. It has been on my back for a century now. One of the things I’ve learned to see as a constant.

I tilt my head. “Rye, what makes you think this?” I question with a smirk. “How has the biggest mob family in New York and New Jersey since the nineteen twenties been any form of just?”

“Yeah, yeah, Kendrick. I get your point,” Reilly grumbles.

“So, this is really their fate. To never have sons again. Without a son, it will be nearly impossible to keep their bond with us,” Ardan says with wrinkled brows.

“How do you suppose they’re trying to keep the bond if they truly feel they’re hiding this fact from us?” Bradan finishes Ardan’s thought.

“This is the question I’ve asked myself. Each of them has had a child and each has kept the child hidden from us. The Gods will not allow me to see these children, but I’m absolutely sure they’re not male,” I say in frustration.

“You mentioned names. The fates have given us names, but no faces. They are all male names. Yet, you don’t see males in the bloodline of this generation,” Bradan muses.

“How is it you can’t see past the last generation? It’s odd that you of all of us cannot see them,” Reilly murmurs. “Have you thought of removing your iron?”

“No,” I say emphatically.

Rye holds his hands up. “It was only a suggestion.”

“A foolish one. We’re not mated, nor have we broken our bond of duty. You as well as I know that if any of us removes our iron it will cause mass destruction and call those we’ve remained hidden from.”

“This we know, but we remain vulnerable as long as we are unmated and in servitude.”

“Well, it seems one of those problems is about to be resolved. The other,” I heave a sigh. “I don’t believe the other will ever happen. No female can handle the warlock within us, and there isn’t a witch worth her sanity that will come near our demi blood.”

“This is our truth,” Bradan says gruffly.

“Or is it?” Ardan asks as his eyes begin to glow.

I straighten and watch my brother’s face for clues of what he may be channeling. His gifts allow him to feel the emotions of others. Especially the feelings of our bonded family.

Ardan’s mouth opens and closes a few times. His brows knit and the energy that pulses off of him is like nothing I’ve ever felt before. I go to step towards him, but he lifts his hand to halt me.

“You are needed, Kendrick. You will know her once you find her. Go,” Ardan commands.

I go to correct him for ordering me around, but I feel like I’m hit in the gut with a boulder. The room begins to pulse around me as it comes in and out of focus. I can feel my powers humming against the iron that harnesses it within me.

“What the fuck?” I grunt against the pain.

The room disappears again and I’m on a street. I continue to faze in and out of the den and the darkened street. It is on the fourth time that I see the figure running towards me. The closer the figure gets the more my powers rage against their constraints.

My veins feel alive, it’s as if my heart is beating double time. I reach out for the figure not knowing why. Just as I stumble forward I flash back into the den.

I whip my head around, waiting to be returned to the street. All I find are my brothers standing before me—each one with his eyes alit.

He doesn’t have to tell me twice. Instinctively, I know just where I’m going. I just don’t know what I will find.

Want to know what happens next... make sure to read King of Past first then read this epic story King of Knights. Pre-order now from iBooks, Nook, and Kobo! Thank you for your support!

Oh, and we have a giveaway for you! Follow the Kings for a chance to win! 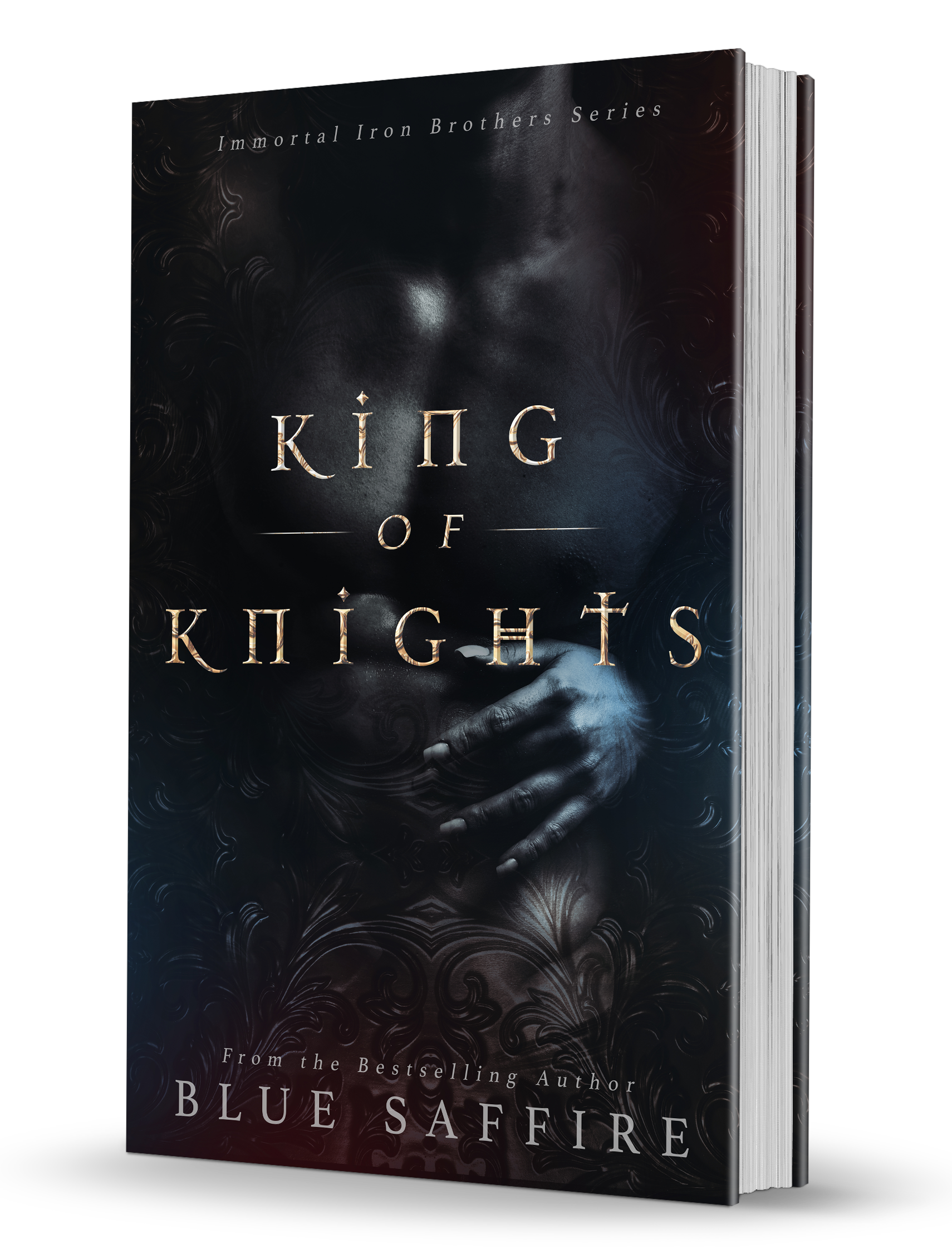 All that's Newly Releasing In the World of Blue Saffire? Oh and Giveaways!

A Million To Stay And Things you need to Know! 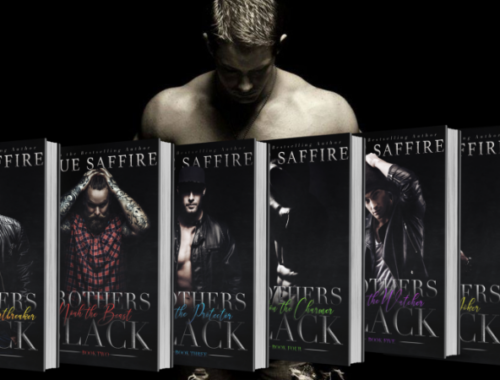 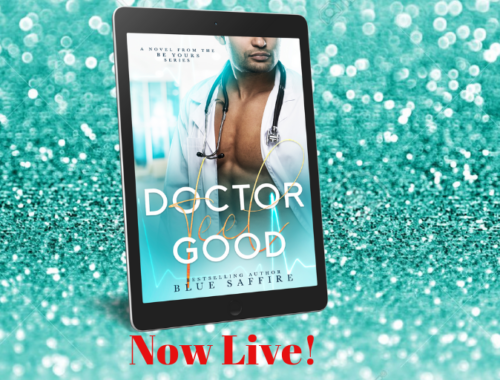 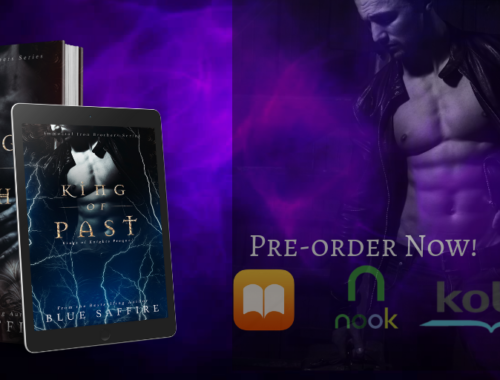